Link to product on website:
Guntec USA 12' Free Float Rail System
Actual Image installed on my PSA AR15:
What you need for installation:
1. Armorers Tool ~$25-$30 USD
2. Low Profile Gas Block ~$20-$xxx USD
Make sure you're purchasing a gas block with the proper inner diameter (OD of your barrel)
3. Rail System and Included Components $129 USD MSRP
4. Optional but recommended: Upper receiver vice block (to steady the upper receiver for delta ring/barrel nut removal/installation.
Included Components:
A. Rail System (Free Float)
B. Barrel Nut and Jam Nut
C. Rail Sections
D. Allen Wrenches (x2)
High-level installation Instructions:
(NOTE: Search the below topics within the forum/YouTube for a more in depth explanation,)
1. Remove flash hider or compensator with Armorers tool (if applicable)
2. Remove front sight post or gas block with punch set (taper pins) or allen wrench (if low profile block already installed)
3. Remove current handguard
4. Remove delta ring using armorers tool (barrel will then be removable)
5. Remove gas tube
6. Carefully thread on new barrel nut making sure to align the hole for gas tube; tighten with armorers wrench
7. Screw jam nut on all the way to the upper receiver (do not tighten--hand tight only)
8. Reinstall gas tube
9. Install gas block by sliding it over the barrel and aligning the hole on the gas tube with the hole on the gas block/barrel; tighten with allen wrench
10. Carefully thread the Rail onto the barrel nut; thread the rail as far as possible while arriving at correct orientation (there is a larger allen set screw that should be facing down)
11. There should be a very small amount of space between the jam nut and rail (smaller the better, but it is what it is--you cannot change this gap); tighten the jam nut against the rail system while maintaining the orientation of the rail
12. Tighten the set screw on the bottom of the rail
13. Reinstall flash hider or muzzle device
14. Enjoy!
Blue Loctite is recommended for all threaded areas, but not required.
Review:
The good:
This system will give you the efficiencies of any free float system, improved accuracy and accessorization (word?). The rail sections are movable/removable.
This allows you to place accessories where you'd like, but also allows you to eliminate the unnecessary weight associated with a full 4 rail system.
It looks badass (IMO.) It is sub $150 in price. It is very simple to install with the proper tools. No reviews to go on, but it feels like this rail is very solid and will stand up to whatever I or any average shooter will ever throw at it. Monolithic top rail (look--not true) of more expensive systems.
The bad:
This rail is noticeably heavier than basic plastic, or high-end rail systems. Not an overwhelming weight, but my system is 1.75 lbs heavier with this rail than it was with the old M16 style guard and A1 sight post. Plastic does not get nearly as hot as black aluminum. When left in the sun/heat--if you shoot outside in the sun, you already know--your black metal rifle is going to get hot. This aluminum rail will get a lot hotter than the basic plastic rails will. Too many screws; while there are some positives of the rail sections being removable, AND you can somewhat remedy this with some Loctite, less moving parts is usually better in my experience. There are really no other reviews out there. While my experience with this handgard is very limited, I do not know how well this will hold up in the long run.
Overview:
I would recommend this for any backup rifle, a strict target shooting rifle, or a cheap first free-float system. If you decide you do not like it, you're only out $130, and you can resell the item for pretty close to that amount easily. For a home I'd stick to the basic handguard to keep down weight. If you're going to be running through courses or hauling this around on your back for hours at a time, get something lighter or keep the plastic handguard. An extra 2 lbs can make more of a difference than you might think if you haven't experienced carrying something like this around all day.
I wanted to provide a simple review so that those considering this system have something to reference. To date, I believe this is the first and only review around.

Guntec Usa sent me their new compression M-Lok handguard for review. They were also kind enough to send an extra one that we gave away on the podcast. This particular handguard is a 15” free float and anodized black. Guntec has been making AR accessories in the US for decades.

I noticed a few new things about this compression handguard. Guntec put some QD mounts at the rear of the handguard. In my opinion, this is a great asset. It also came with 1 QD swivel. This handguard also has M-Lok slots all the way down both sides as well as the bottom. That was one of my complaints with their Air-Lite that I reviewed some time ago. This one also has a full length top picatinny rail. As well as diamond cuts throughout to reduce weight. The black anodizing is also a little dull looking, more of a matte finish as compared to a gloss one. It doesn’t scratch off or anything, so there is no need to worry about it.

Installation on the compression handguard is super easy. All you really need to do is install the barrel nut and tighten to manufacturers specifications (standard AR15 barrel nut torque). There is no need to index the barrel nut. Slide the tube on. Line up the top rail with the receiver rail. Then tighten down the 4 clamp screws. I put some medium threadlocker on these 4 screws, but it probably isn’t needed. That is really all there was to it. One slight problem with this particular handguard, is that the rail on the handguard sits a little bit lower than the receiver’s rail. Not enough that flip up iron sights won’t zero, but enough to notice.

At first I was a little hesitant about the compression style of handguard. But after crashing it up against some 2x4 barricades, I’m not worried about it twisting or not lining up. The clamping force around the barrel nut seems more than enough to hold everything lined up. I really liked the feel of the handguard. It is small enough for me to get my hand around. This makes it very easy to drive the muzzle from target to target. It is just under 2” from the top of the rail to the bottom of the handguard and 1.5” outside diameter everywhere else. The inside diameter measures 1.34”, so don’t expect to put a suppressor under it. And you will definitely need a low profile gas block. The whole combination of screws, barrel nut, and handguard came in weighing 10 ounces on my scale. So pretty lightweight.

As mentioned earlier, I like how this handguard feels. It does however get warm after 3 or 4 mag dumps. That’s pretty normal given the diameter and how close it is to the gas block. As with a lot of long handguards, there is some flex out at the end by the barrel. Not as much as I have seen on others, but a little. This leads into the location of the QD mount. Because they are located by the barrel nut, any force put on them doesn’t appear to flex the handguard any. Guntec also sent some rubber M-lok plugs with the handguard. These plugs just kind of push into any unused slots and give a rubbery grip to the handguard.

If you’re interested in some quality, value priced AR parts, go check out Guntec USA. This particular handguard is pretty decent. It feels good in the hand, looks decent, and won’t break the bank. Plus, if it’s not your style, they probably have something that is.

Users wanting to upgrade to a 15' handguard

FNBs (Features & Benefits of this product): 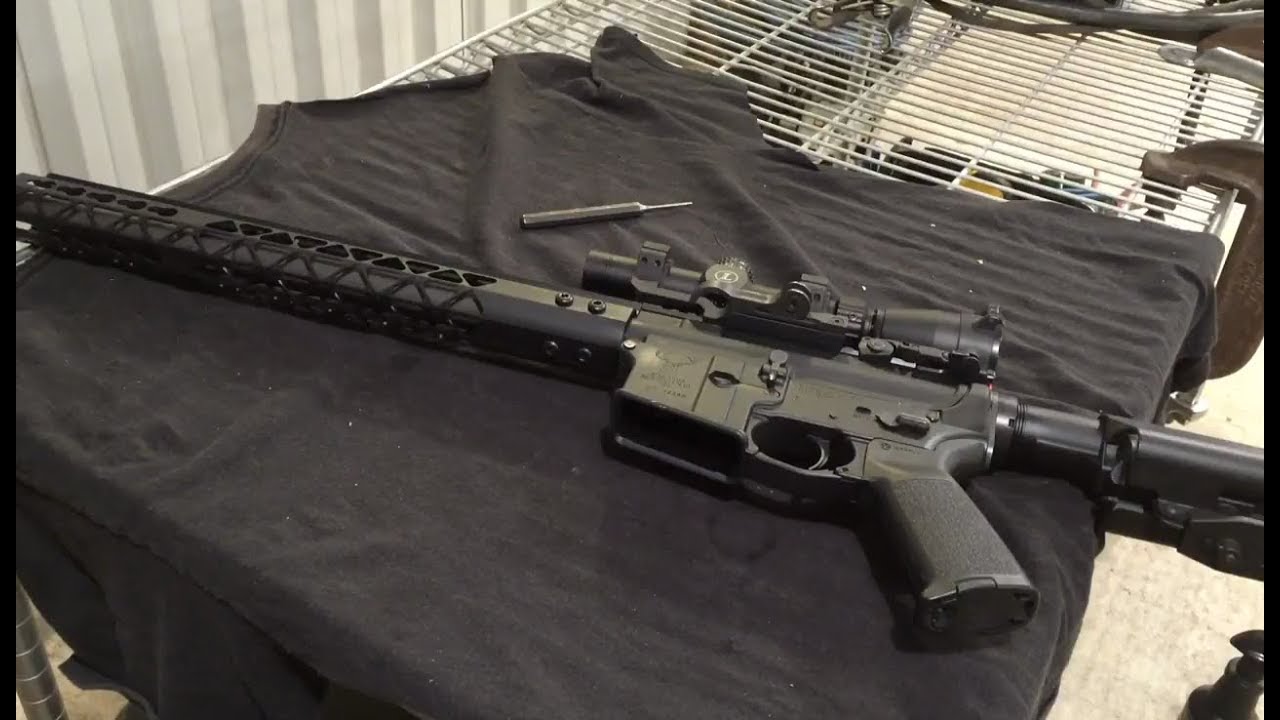 What other aesthetic options or finishes are available?

What others are saying?:

Link to other reviews:

I need it now! Availability: