Guntec Usa sent me their new compression M-Lok handguard for review. They were also kind enough to send an extra one that we gave away on the podcast. This particular handguard is a 15” free float and anodized black. Guntec has been making AR accessories in the US for decades.

I noticed a few new things about this compression handguard. Guntec put some QD mounts at the rear of the handguard. In my opinion, this is a great asset. It also came with 1 QD swivel. This handguard also has M-Lok slots all the way down both sides as well as the bottom. That was one of my complaints with their Air-Lite that I reviewed some time ago. This one also has a full length top picatinny rail. As well as diamond cuts throughout to reduce weight. The black anodizing is also a little dull looking, more of a matte finish as compared to a gloss one. It doesn’t scratch off or anything, so there is no need to worry about it.

Installation on the compression handguard is super easy. All you really need to do is install the barrel nut and tighten to manufacturers specifications (standard AR15 barrel nut torque). There is no need to index the barrel nut. Slide the tube on. Line up the top rail with the receiver rail. Then tighten down the 4 clamp screws. I put some medium threadlocker on these 4 screws, but it probably isn’t needed. That is really all there was to it. One slight problem with this particular handguard, is that the rail on the handguard sits a little bit lower than the receiver’s rail. Not enough that flip up iron sights won’t zero, but enough to notice.

At first I was a little hesitant about the compression style of handguard. But after crashing it up against some 2x4 barricades, I’m not worried about it twisting or not lining up. The clamping force around the barrel nut seems more than enough to hold everything lined up. I really liked the feel of the handguard. It is small enough for me to get my hand around. This makes it very easy to drive the muzzle from target to target. It is just under 2” from the top of the rail to the bottom of the handguard and 1.5” outside diameter everywhere else. The inside diameter measures 1.34”, so don’t expect to put a suppressor under it. And you will definitely need a low profile gas block. The whole combination of screws, barrel nut, and handguard came in weighing 10 ounces on my scale. So pretty lightweight.

As mentioned earlier, I like how this handguard feels. It does however get warm after 3 or 4 mag dumps. That’s pretty normal given the diameter and how close it is to the gas block. As with a lot of long handguards, there is some flex out at the end by the barrel. Not as much as I have seen on others, but a little. This leads into the location of the QD mount. Because they are located by the barrel nut, any force put on them doesn’t appear to flex the handguard any. Guntec also sent some rubber M-lok plugs with the handguard. These plugs just kind of push into any unused slots and give a rubbery grip to the handguard.

If you’re interested in some quality, value priced AR parts, go check out Guntec USA. This particular handguard is pretty decent. It feels good in the hand, looks decent, and won’t break the bank. Plus, if it’s not your style, they probably have something that is. 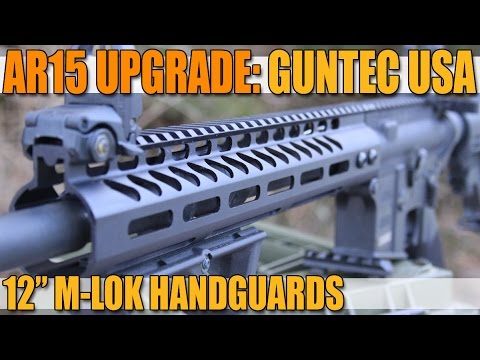 Users wanting to upgrade to a 15' handguard

FNBs (Features & Benefits of this product):

What other aesthetic options or finishes are available?

What others are saying?: Link to other reviews:

I need it now! Availability:

Why install a free float handguard?

One of the main benefits to free-floating an AR-15 is an increase in accuracy from reduced variability in the barrel harmonics due to sling tension. The traditional AR-15 configuration has the sling mount attachment at the base of the front sight gas block, so moderate changes in sling tension can change the point of impact downrange. A direct impingement AR-15 can never be truly “free-floated” due to the attachment of the gas block and gas tube, but the addition of a quad rail or other free float style handguard can help with accuracy and also provides a stable and convenient platform for attaching bipods, lights, grips and other accessories.

What do I need to install a free float quad rail handguard?

When planning your free-float project, take a close look at the type of gas system currently on your rifle. Most standard front sight gas blocks are held onto the barrel by either tapered pins or by clamps. Make sure you have all the right tools and parts on hand for disassembly and reassembly before starting work.

As always, before working on any firearm make sure it’s unloaded and safe to handle.

2. Separate the upper and lower receivers and remove the bolt carrier group and charging handle.

3. Clamp the upper receiver into a vise using a vise block and remove the flash hider and crush washer. The crush washer will not be reused.

4. Tap out the gas tube roll pin with a #2 roll pin punch and inspect the front sight gas block. If it has tapered pins, drive them out with a cup tip punch from the small side. If unsure, measure the pin diameter on each side first. If the pins are difficult to remove, apply penetrating oil, let sit overnight and try again. Sometimes applying light heat to the area also helps with removal.

5. If the gas block is a clamp-on type, use a hex key to loosen the set screws. Remove the original front sight gas block assembly from the barrel. If it sticks, gently tap on it with a soft-faced hammer until it slides off the barrel. Remove the handguard retainer and gas tube.

6. On a bench block, align the gas tube through-hole (with the large hole facing down) into the new gas block and use a roll pin holder to start the roll pin. Drive the roll pin flush with the gas block.

7. Remove the original barrel nut/delta ring assembly with the armorer’s wrench, then clean and inspect the upper receiver threads.

8. Remove the anti-rotation screw from the bottom of the new handguards and unscrew the new barrel nut, removing it from the handguards. Apply a thin layer of high quality lithium moly grease to the inside threads of the barrel nut, install it over the barrel so that the lock ring faces toward the upper receiver, then hand-tighten the barrel nut.

14. Adjust the lock ring and handguard until the top rail (marked “T”) is almost aligned with the rail on the upper receiver. Use a strap wrench and carefully tighten the handguard until snug. Be careful not to over-tighten; if too much torque is applied, it can misalign the barrel nut and gas tube underneath.

15. You can check for proper gas tube installation using the bolt carrier at this time: insert the bolt carrier group (without the charging handle) into the upper receiver and slowly slide it forward, checking to make sure the carrier gas key doesn’t bind on the gas tube.

18. Then apply blue threadlocker onto the anti-rotation screw on the bottom of the handguard, install it, and tighten until snug.

19. Reinstall the charging handle and bolt carrier group, then reassemble the upper and lower receivers and you’re done!